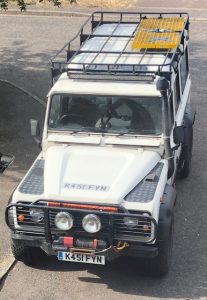 My faithful Land Rover Defender was stolen on Tuesday 11th December. I am gutted. I’ve owned the car for about six years and spent a lot of time, effort and money on keeping it running as well as upgrading things on it. Somebody out there decided they would just take it because they could. For them it was a pile of money parked on the road which they felt entitled to break into and drive away. To me it was much much more.

I am sure the insurance will eventually pay some money out after the next few weeks of them investigating it. I expect I’ll get less than I paid for it and not enough to be able to replace it with a similar vehicle. I will also never again see the personal possessions in the vehicle. Some I bought, some were gifts. I had a few tools that I inherited from my deceased father. Maybe a few pounds in cash value but a fortune to me sentimentally. I used to take pride in the fact I was using my Dad’s tools to keep ‘Huck’ on the road.

None of this will worry the people that stole my car. They will strip it down, burn it out or ship it abroad for sale and I will probably never see it again.

If you do see a white Land Rover Defender, K451 FYN please call the police on 999 or post to Landywatch. 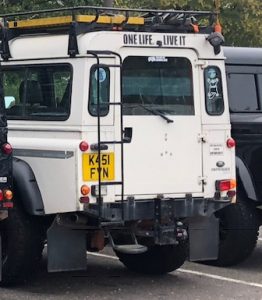